Spotlight: Picture This by Jayne Denker

Are you ready for another book recommendation? OK, OK, I know what you're thinking...stop sticking your nose in a book and get back to writing French Fry already! Once my massive case of writer's block ends, I will get right on that.

In the meantime, I have an awesome book for you! The *fabulous* Jayne Denker has just released the second book in her Marsden series! Picture This just came out today! I am happy to report that is in my hot little hands on my Kindle Paperwhite right now! 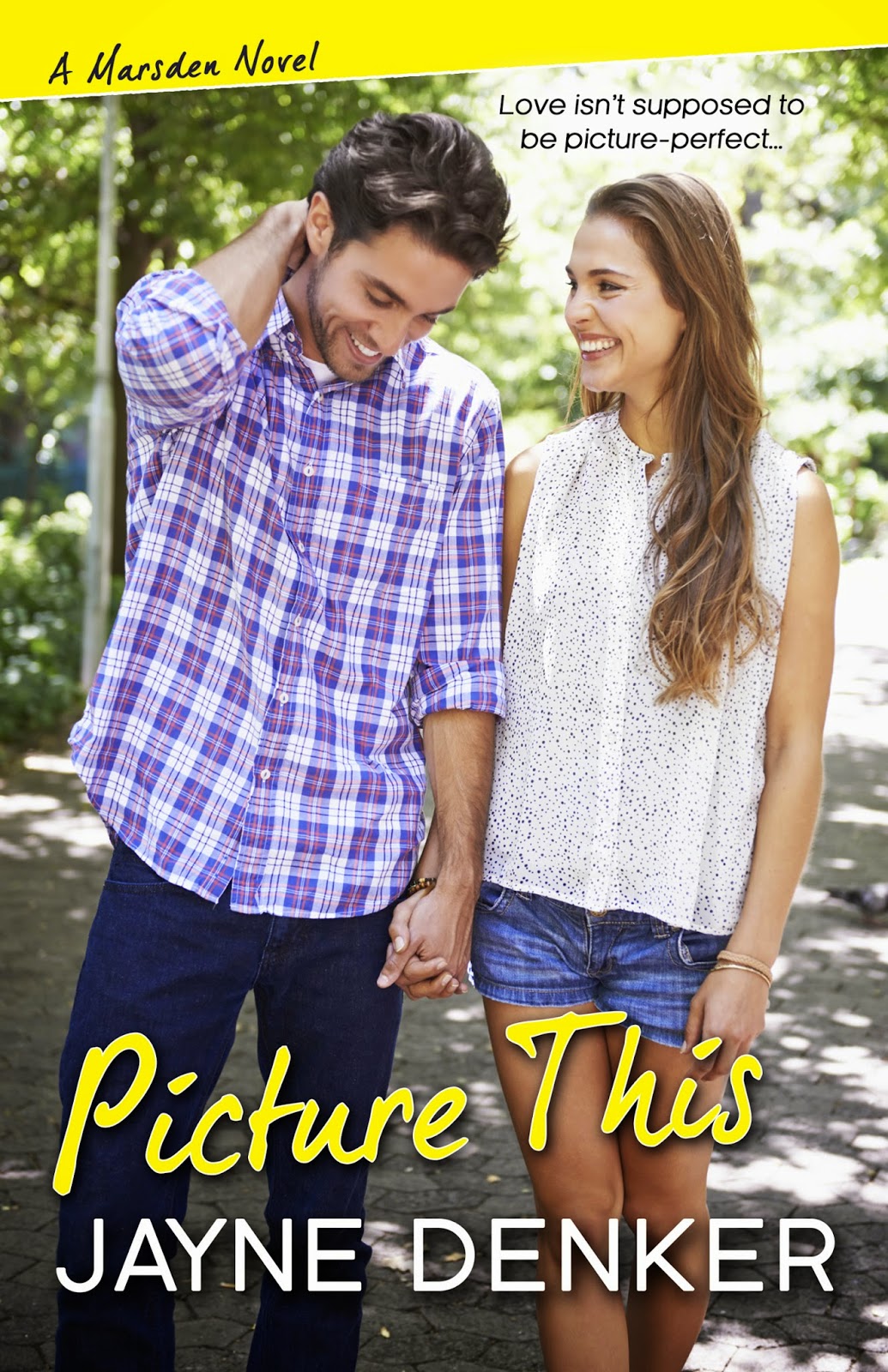 It’s where everyone knows your business—and remembers everything you’d rather forget. But somehow the little Catskills town of Marsden draws the most unlikely people back home, turns their lives every which way, and helps them finally figure out what—and who—they want most…

As a celebrity photographer’s assistant, Celia Marshall is used to seeing all kinds of weird antics. But subbing as the model in irrepressible movie star Niall Crenshaw’s latest endorsement ad—while wearing his silk boxers, no less—is definitely not in her job description. Neither is falling for him, especially since he’s dating his latest co-star. To complicate things further, Celia is returning to Marsden to keep an eye on her eccentric grandmother—and Niall is driving her there, then staying to judge a talent contest…

Soon Celia is pulled in a dozen different directions, trying to get her grandmother to act her age, placating her frantic former boss who’s organizing the contest—and attempting to stay away from funny, sexy Niall. Celia’s always been level headed, but suddenly she’s wishing she could get reckless right along with him. Has the time come for sensible Celia to cut loose?...

Want a sneak peek? I thought you might! Poor Celia has just received her grandmother from policy custody following her decision to perform a series of donuts in a farmer's field. What a great time to introduce her to Niall!

After a few general pleasantries, Officer Billy made his way back to his cruiser, and Celia exchanged a look with Niall. She shook her head, disbelieving. “What is wrong with her?”

Niall climbed the porch steps and put his hands on her shoulders. “Hey, go easy on her, all right? Maybe nothing’s wrong. You said she does this sort of thing all the time.”

“I think she’s getting worse.”

“What are you saying about me?” Holly demanded from inside the house.

The old woman peered out through the screen door. “Who’s that? The movie star? Well, bring him in here with you. I want witnesses.”

She ambled away from the door, expecting Niall and Celia to follow.

“You don’t have to,” Celia murmured to him.

“And miss this? Are you kidding?” Niall held open the screen door for her. “After you.”

They found Holly in the living room. “Come here, movie star. Let me get a look at you.” She peered up at Niall, squinting, appraising.

She shook the hand he offered. “You’re a tall drink of water, aren’t you?”

“Guess so.” The fact that she was remarkably short just emphasized his height.

“Ah, you were in that movie with the...the...what was it...the snake, right? On your shoulder all the time?”

Niall rounded on Celia. “Ah-hah! You said you didn’t watch my movies!”

“No, I said I didn’t go out of my way to see your movies. I caught that one on basic cable. At two in the morning. Edited for language and to make room for a thousand commercials.”

He clutched his shirt over his heart. “You wound me.”

“The lizard was a better costar than the one in your last movie, I’ll say that much,” Holly snorted as she eased herself into her favorite chair.

“I didn’t care for her—what was her name? The one with the peroxide hair. Girl couldn’t act. Lizard had better skin, too.”

“Really?” The old woman shrugged, unapologetic. “Meh. And if she’s his girlfriend, why is he here with you?”

“He’s not here with me. He’s hosting Ray’s singing contest.”

“Ah. You have my deepest sympathy, young man.” Then she looked up at her granddaughter. “All right. Go ahead. Let me have it.”

Celia sighed, disapproving and disappointed. “Will said he has to write this up. It’s going on record.”

“In my permanent file, along with the D minus I got in shorthand in high school? Color me terrified.”

“You should. Even if Shane didn’t press charges, Mom and Dad are going to find out about this—it’s inevitable. And they won’t like it.”

Holly said nothing for a moment, then took a gulp of scotch and said into the glass, “I know.”

“And you really shouldn’t be drinking so much.”

“Don’t care. By the time you get to my age, what the hell’s the difference? I’m eighty-five, by the way,” she informed Niall.

“You don’t look a day over seventy. And I mean that.”

Other senior citizens would have been offended. Holly just cackled with glee. “I like this one,” she said to Celia. “He’s a lot funnier in person than in his movies.”

“Oh, I don’t mean anything by it,” the older woman said, waving her hand dismissively. “I just think you can do better than the dreck they put you in, young man.”

A corner of Niall’s mouth lifted grimly. “I agree.”

“See?” she said to her granddaughter. “He agrees with me.”

“Well, you could have put it a nicer way.”

“It’s not my agent’s fault; it’s mine. Sometimes I make bad choices.”

He didn’t want to go into his motivations for his poor choices; luckily, Holly didn’t ask.

“All I can say is, my granddaughter is one of the best choices you’ll ever make in your life.”

Mortified, Celia covered her face as Niall said politely, “I realize that, ma’am.”

(Excerpt from Picture This by Jayne Denker, Copyright 2014.)

That was priceless! Excellent choice of excerpt, Jayne.
Here's the lowdown on this very talented author. 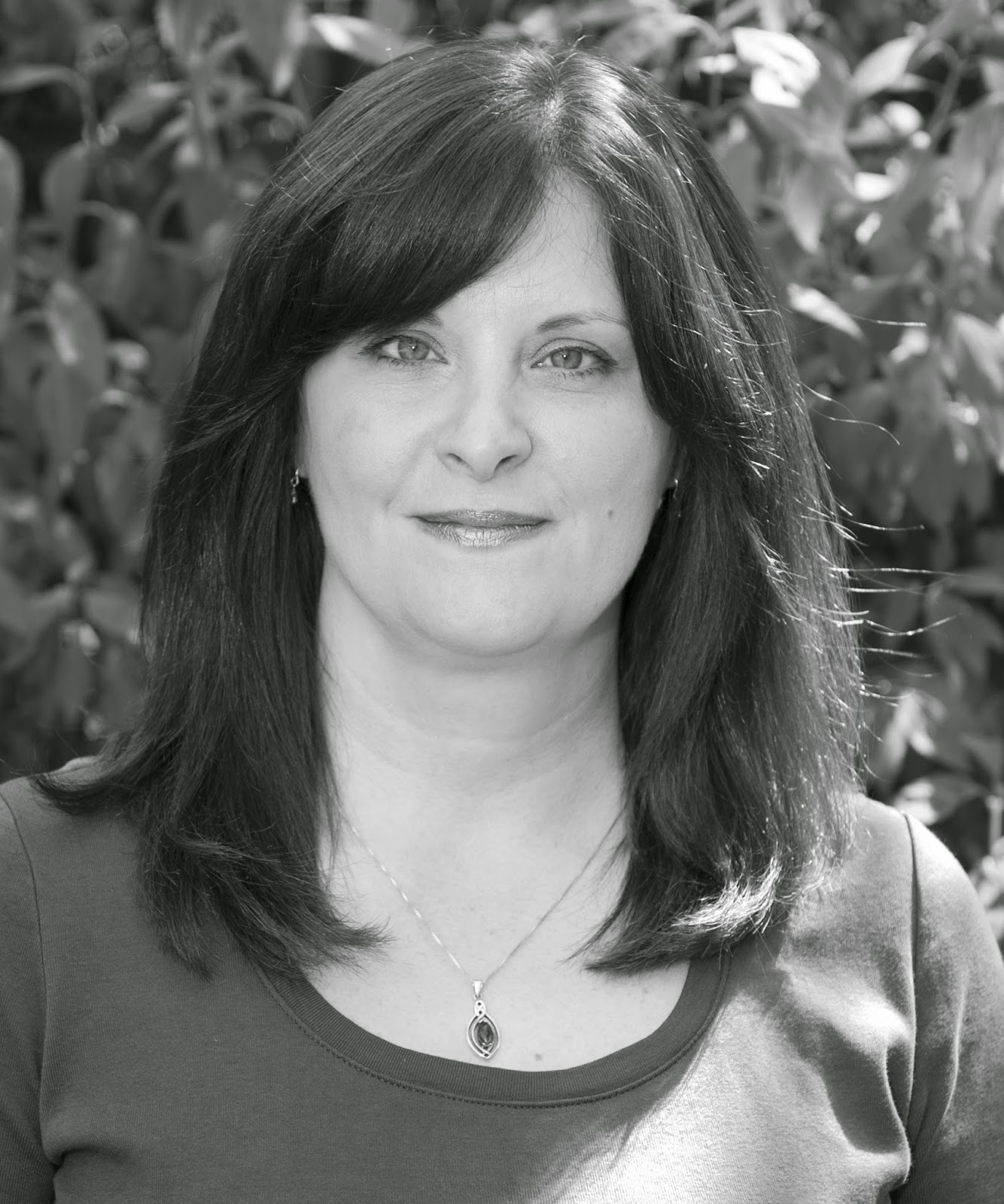 Jayne Denker divides her time between working hard to bring the funny in her romantic comedies and raising a young son who's way too clever for his own good. She lives in a small village in western New York that is in no way, shape, or form related to the small village in her Marsden novels Down on Love and Picture This. When she's not hard at work on another novel, the social media addict can usually be found frittering away startling amounts of time on Facebook and Twitter.

And because Jayne is the Queen of Graphics, I have one more goody for you before I go! 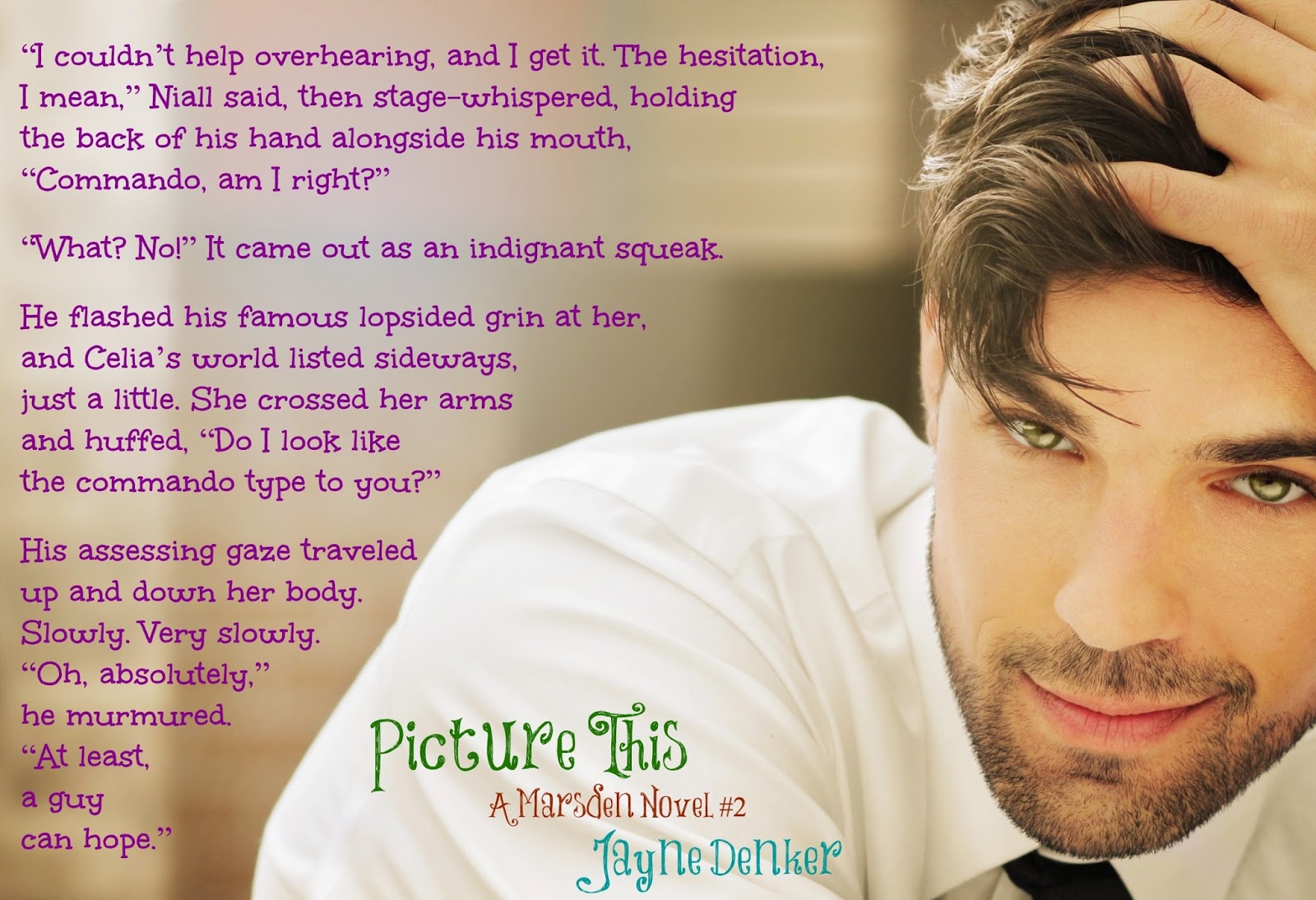 Ready to buy this book? You sure have a lot of options!