New Release: Any Way You Fight It by Monique McDonell

Are you ready for another great addition to your Chick Lit library? The very talented Monique McDonell has just released Any Way You Fight It, the third book in her Upper Crust series. 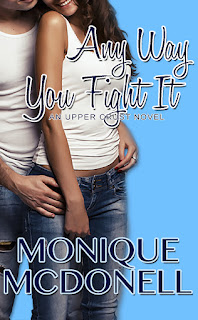 Matchmaking came easily for Cherie . . . unless she was matching herself. A successful realtor, Cherie could sell a piece of property with ease, she could match up her friends with their perfect mates, but she couldn’t seem to find love for herself. Heck, even her seventy-five-year-old Nona was dating again! Cherie had the perfect love once, or so she had thought. But that was a long time ago, and yet, Luke was the standard by which she measured all potential mates.

After matching her two best friends and watching them live their happily ever afters, Cherie decides it’s time to make a change and get back in the game. Now all she needs to do is balance what she wants (a Luke-alike) with the demands of her crazy Italian family (a good, Catholic Italian boy).

Just when she is ready to shake off her past and move forward, her past walks through the door of her favorite local pub with her best friends. Luke is back, looks better than ever, and still has eyes for Cherie. And Cherie can’t control the heat she still has for him. But as with most long-lost loves, he has a past as well, and that past just might prevent Cherie from finding her happiness despite what her Nona’s visions predict.

Can Cherie and Luke make peace with their pasts and look forward to a new life together? Or will this be the final good-bye?

Want a sneak peek? Check this out!


Lucy called me the next day. I was unlocking the door to my office. I was juggling keys, a folder, a latte, and an open house sign but I still managed to take the call.
"What's up, buttercup?" I said.
"Not much . . ." I could visualize her on the other end in kitchen whites and a hairnet trying to come up with a witty reply. "You sound perky today. Piper said you were exhausted last night."
"I was. Still am, actually." That wasn't a lie. I barely slept, tossing and turning all night with sexy and angry thoughts about Luke. "Your call perked me right up. Oh yeah, and I'm about to down my third coffee."
"Oh, I hope you're okay."
"I'll be fine. What's happening there?"
"Well, you met the hottie corporate sent to help us with branding."
"Don't you have a fiancé already?" I tried not to let jealousy seep in. Keep it light, Cherie.
"A girl can look. Anyway, you don't have a fiancé . . ."
"Yeah, well, I don't want a fiancé, and even if I did, I wouldn't want that guy."
"He seems pretty cool."
"Not my type." I needed to shut this down. “Anyway, he's probably married. How long is your new eye candy in town anyway?"
“He’s not, married I mean. A week or two, but he'll be back and forth." Great. "Maybe you two could . . ."
"Thanks for pimping out your new colleague, but if I wanted a guy, I could find my own." I tried to sound haughty. "Anyway, Lucy, I have to run. I have about a million calls to return. "
I dropped my bundle, minus the coffee of course, on the office sofa and turned at the sound of the bell above my front door tinkling. There in resplendent glory -today in chinos and a white shirt with sleeves rolled to the elbows, offsetting a killer tan- was Luke.
"Not your type, huh?" he said, closing the space between us a little.
"First of all, don't you know it is rude to eavesdrop and second, definitely not."
"I used to be," he said, one hand shoved in his pocket and the other gesticulating.
"Well, we all used to be different, didn't we?"
"I bet we're not all that different, you know."
"That's hardly a ringing endorsement for either of us." I leaned back against the edge of my desk, using it to balance me, and took a long sip of my latte. Some days there just wasn't enough coffee in the world.
"I don't know, I thought we were decent kids back then . . ."
"Until at least one of us wasn't."


"And which one was that?" he asked as if he didn't know. The bastard.
"What brings you here, Luke? I kind of have a lot to get done today."
"I wanted to see you."


Now for a bit about Monique from the woman herself: 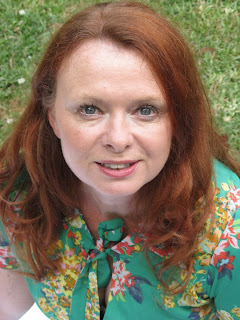 I am an Australian author who writes contemporary women's fiction including chick lit and romance. I live on Sydney's Northern Beaches with my husband and daughter, and despite my dog phobia, with a dog called Skip.

I have written all my life especially as a child when I loved to write short stories and poetry. At University I studied Creative Writing as part of my Communication degree. Afterwards I was busy working in public relations I didn't write for pleasure for quite a few years although I wrote many media releases, brochures and newsletters. (And I still do in my day-job!)

When I began to write again I noticed a trend - writing dark unhappy stories made me unhappy. So I made a decision to write a novel with a happy ending and I have been writing happy stories ever since.

I have been a member of the writing group The Writer’s Dozen for eight years. Our anthology Better Than Chocolate raised over $10,000 for the charity Room to Read and helped build a library in South East Asia. I am also a member of the Romance Writers of Australia. I was also had a piece in the Australian non-fiction book Copyfight in 2015.

I have written five stand-alone romantic comedies and three books in the Upper Crust Series ;Any Way You Slice It, Any Way You Dream It and Any Way You Fight It.

To learn more about Monique McDonell and her upcoming books please visit her at:

Ready to buy Any Way You Fight It?

And don't forget to enter the giveaway for an Amazon gift card!

a Rafflecopter giveaway
Posted by Unknown at 7:23 AM